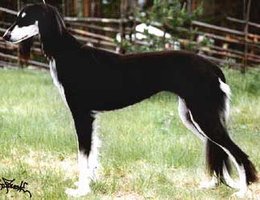 Kennel Badavie was founded in the early 70's by Maria's mother, Kerstin Abrahamsson. After a few years studying in the USA, Kerstin brought back with her two Saluki's to Denmark, where Maria and her mother lived for a couple of years. The dogs where USA champion Srinagar Jamal of Jasperwall who later became DK champion as well and Crown Crest Lackasat who also became DK champion. Kerstin's first litter was from Crown Crest Lackasat.

Litter number two was after a bitch which was imported from Finland, Kirman Reseda of kennel Kirman, Hilkka Nousiainen, this litter had "Jamal" as the proud father. The result was among others Int Nord Fin Uch Beduin who became the ancestor of kennel Badavie and Int Nord Uch Baklava who became the ancestress for Monica Nilsson at kennel Baklava here in Sweden. Kerstin bought a bitch from a Swedish kennel, Zohari (Birgitta Nordqvist). The bitch was Zohari Emsy Zinback and the father was "Jamal". The result was among others "Feisal" and "Flash" who was purchased by Birgitte Horne Nielsen in Denmark. Birgitte runs her own kennel these days with, you guest it, Feisal as her kennel name. Feisal became The Saluki of the Year in Denmark for many years to come.

In 1976 when Kerstin and Maria moved to Sweden, the dogs had to be quarantined in Finland. With them they had Jamal, Baklava and Beduin. Zohari Emsy Zinback found a new home in Finland. 1978, Maria moved to a house in the countryside outside Karlstad, deep in the Swedish forests. She also took over the breeding and named the kennel Badavie, which was approved by the Swedish Kennel Club. Unfortunately the name Beduin (Bedouin in Swedish) was already taken so Maria chose Badavie instead which means Bedouin in Arabic. I, Marie Brandén, met Maria for the first time in 1980 and before the year had come to an end I was the lucky mistress to a Saluki bitch by the name Cerasi Siniara who was after Beduin and Ahzomali, a bitch from Anders Frändén in Östersund. Three years later I was chosen by another bitch, this time from Badavie's B-litter; Int Nord Uch Sv-89 Badavie Ba-Iba, Beduin x Such Baklavas Bayni-Dalika. At that time Maria had Beduin, Baklavas Aseraq Gamal, Baklavas Bayni- Dalika and Al Faraz Gala Maya the last-mentioned is also a Beduin daughter.

In 1992 Maria asked me if I would like to become a full partner in the kennel and needless to say, I accepted. Who can refuse such a offer, to be able to join a already established kennel. A kennel that I already was involved in and definitively knew to be the type of Saluki that I prefer.

Maria and I had already done so much together and we knew that we mostly thought alike, therefore it was a joy that it turned out this way. The benefit of being two in a kennel is that one has a sounding board to utilise. Such Badavie Fantasi is the mother of our I-litter and the father is S Fin Uch El Hammrah Jibal. This litter has brought to us fantastic successes in the showrings with among others Illuin , Ivanneth, Idril, Ingwe and Imrazor. The J-litter is after Badavie Galena who also was mated with El Hammrah Jibal. Galena is also the mother of the single puppy that is the K-litter with Sera Bharam as the father.

One single puppy was the outcome as well after Badavie Firiel and N Uch Caravan Ibydaad, that is our L-litter. Such Badavie Hildorien was mated with Such Baghdad Rubens and got our M-litter. The N-litter is the result of our Int Nord & Fin Uch Badavie Galandriel and Int Nord Uch Badavie Faramir. Two of our bitches from the I-litter, Ivanneth and Illuin has had one litter each. Ivanneth is the mother to the O-litter and the father is Nuch Caravan Ibydaad.

Illuin gave birth in January-98 together with Such Sundown Shamsi Adad, it became Badavie's Q-litter. In between, Int Nord & SF Uch Badavie Galandriel got her second litter, this time with DK Uch KLBCH KBHV-95 Feisal`s Qaaniy Qharim, that is our P-litter. The following year, two litters saw the light. In January Multi Uch Badavie Illuin mated with S Uch Sundown Shamsi Adad and later in August Int Nord & SF Uch Badavie Galandriel found a hound in S N Uch Badavie Imrazor. The outcome of this year was the Q and R-litters. 1999 was the year when kennel Badavie won the prestigious Swedish Kennel Club title "Best breeder of all breeds". 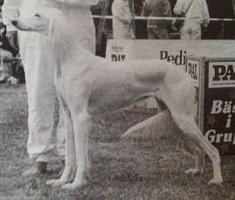